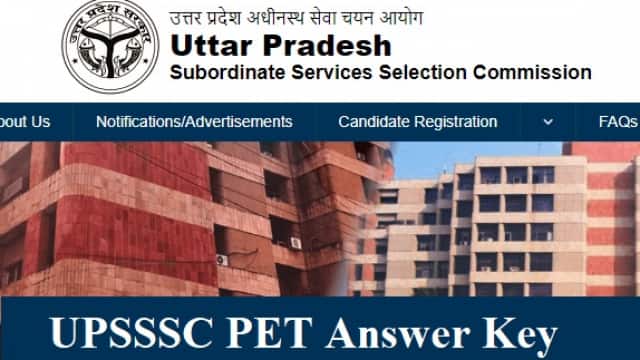 UPSSSC PET Answer Key 2022: Uttar Pradesh Subordinate Services Selection Commission (UPSSSC) has released the answer key of Preliminary Eligibility Test (PET) 2022. Candidates can check it by visiting upsssc.gov.in. Candidates will be given an opportunity to raise objections to the answer key later. UPSSSC will issue a separate notice for this. The window for filing the objection has not been opened yet. The PET exam was conducted on 15th and 16th October 2022 for the recruitment of Group C vacancies in various government departments of UP government. This time around 37 lakh candidates had registered for the state’s biggest recruitment exam PET 2022. About 67 percent candidates appeared in the exam and 33 percent left the exam. A total of 25,11,968 candidates appeared for the exam.

The average of the candidates told in the question paper
According to the candidates, the questions of general studies remained common, but in mathematics, especially, there was difficulty in doing data interpretation (analysis of data) and questions based on graphs. Some questions were conceptual. Science questions were also mediocre. Question number 7 in question book number 10739151 was asked in which state India’s first Amrit Sarovar has been inaugurated. In question number 13 of this paper, it was asked that which city is called the white city of Rajasthan. Questions like the name of the capital of Oman, in which state of India were recently found uranium mines. Questions were asked based on Indian Constitution and Public Administration, History, Economy, National Movement, Geography, General Science, Elementary Arithmetic, Logical Reasoning etc.

Some examinees of Government Girls Inter College Sitapur and RM PPG College Sitapur said that the questions of subjects other than Mathematics were of general level. A candidate Abhishek Mishra told that the paper came well. This time the cutoff can go above 76. Most of the first shift test takers who left the exam centers in Lucknow said that they had solved 85-90 questions. According to the candidates, the questions of GS and current affairs were quite easy. Ajay Yadav, who came out of an examination center in Lucknow, said that the paper was normal. Hindi and General Knowledge questions were easy. Reasoning took time.