UPSSSC PET: 7 arrested including 3 solvers in Shamli-Bijnor one absconding 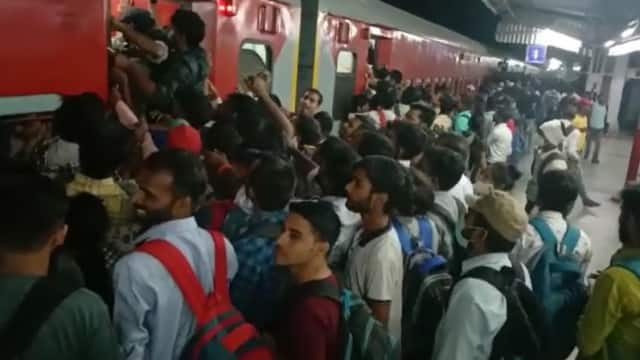 The police lodged a report against these five under serious sections and sent them to jail. At the same time, one accused from Baghpat is still absconding. On the other hand, two Munnabhai were also caught in Bijnor.

UPSSSC PET was conducted in the first shift at 13 centers in Shamli. During the checking on Patriot Inter College of the city, ADM Santosh Kumar and the teachers of the school interrogated some of the examinees, then a young man could not tell the correct name.

READ- PET Exam Lucknow: 3 arrested with solver in Amethi 34 percent in first shift and 33 percent in second left the exam

After this, on the orders of the ADM, the young man was taken into custody by the police considering him a suspect. During interrogation, he also gave information about another youth sitting in the examination room. Police took both the accused into custody.

The arrests accusing were giving the examination of others by taking a contract of 20 thousand rupees. The accused have given their names as Amit Kumar resident of Amarpur, Roh, Nawada Bihar, and Rohit Yadav resident of Daulatpur Jamalpur, Munger Bihar.

During interrogation, it was tolds that Amit Kumar had come to take the examination in place of Sandeep Tomar, a resident of the Baghpat district. While Rohit Yadav had come to take the examination of Sohit Yadav, a resident of Nainital, Uttarakhand. The police have also recovered four mobile phones, fake documents, and other items from the possession of the accused.

In the second shift, the nodal officer caught a candidate named Shubham from Kisan Inter College. Shubham had come to test his real brother Saurabh. Both are residents of Saidbhad village in the Baghpat district. Late in the evening, the police also registered a case against Saurabh. The police have registered a report against all six. Five of these accused have been sents to jail, while Saurabh has not been arresting yet.

In Bijnor’s Government Polytechnic College. Flaws were founds in the admit card of youth in the second shift. The youth was handes over to the police. Meanwhile, a young man standing near the college started running away. The police caught both youths and brought them to the police station.

Share
WhatsApp
Twitter
Telegram
Koo
Email
Print
Copy URL
Previous article
Want to buy a new phone to run 5G, then this is the best option under Rs 15,000
Next article
PM on World Bank’s praise for India as country gets 75 digital banking units