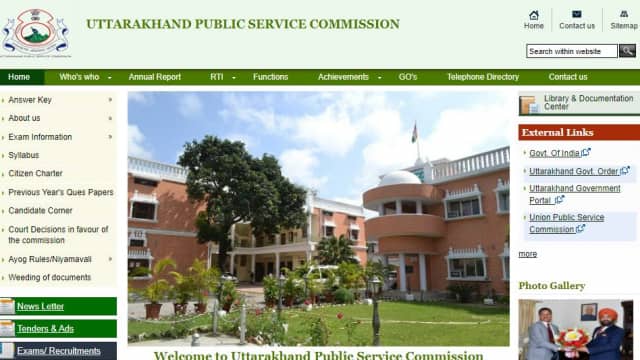 UKPSC Patwari Lekhpal Recruitment: Uttarakhand Public Service Commission has started the recruitment process by issuing a release for a total of 563 posts of Revenue Sub Inspector Patwari and Lekhpal under Group C. The last date of application for recruitment to 391 posts of Revenue Sub Inspector Patwari and 172 posts of Lekhpal is November 4. The commission has uploaded the detailed information for the recruitment of Lekhpal and Patwari on its official website ukpsc.gov.in. Information regarding reservation, age and qualification is given in the release.

where how many vacancies
According to the advertisement released by the Uttarakhand Public Service Commission, Patwaris will be recruited in 11 districts of Uttarakhand. In this, 79 in Pauri Garhwal, 60 in Uttarkashi, 50 in Almora, 45 in Tehri, 38 in Pithoragarh, 27 in Nainital, 26-26 in Chamoli and Champawat, 18 in Bageshwar, 13 in Rudraprayag and nine posts of Patwari in Dehradun. Will go Patwari will not be recruited in Haridwar and USnagar. At the same time, 56 posts will be recruited for Lekhpal in USnagar, 51 in Haridwar, 38 in Dehradun, 26 in Nainital and one in Champawat.

Only the successful candidates in the written examination will be allowed to appear in the Physical Standard and Efficiency Test.

Educational Qualification for both the posts- Graduation in any discipline.

Then the maximum age relaxation on application
The government has given relief to the candidates who have crossed the upper age limit before the start of Group ‘C’ recruitment from the Public Service Commission level. Along with this, the processing fee charged at the rate of Rs 26.55 for the youth who had applied earlier has also been waived off. A letter in this regard has been sent to the Public Service Commission on Friday on behalf of the Secretary Personnel.

In fact, the government has also sent such examinations of UKTripleSC (uksssc) to the Public Service Commission, in which the application process has been completed in the past. Due to this many unemployed meanwhile were left out of the application process due to exceeding the maximum age limit. Due to this, the government has ordered to fix the maximum age in such cases from the date of release issued earlier by UKTripleSC. Along with this, the government has sent a letter to all the departments asking them to set a separate category for the four percent reservation for the differently-abled. After selection, such persons with disabilities will be placed in a separate reserved category.

In this regard, Chief Minister Pushkar Singh Dhami said that the state government is standing with the youth of the state. Special recruitment drive will be conducted to fill vacancies in all government departments. The calendar of examinations transferred from UKSSSC to Public Service Commission has also been released.

Recommendation to cancel recruitment examinations
Expressing doubts over the secrecy of a total of eight exams, UKSSSC has recommended the government to cancel them. Out of these, the result of LT, PA, Junior Assistant, Police Rankers has been released in the past, while the result of Driver, Instructor, Fisheries Inspector, Chief Constable Telecom has not been released yet. These are in addition to the examinations that were canceled earlier.