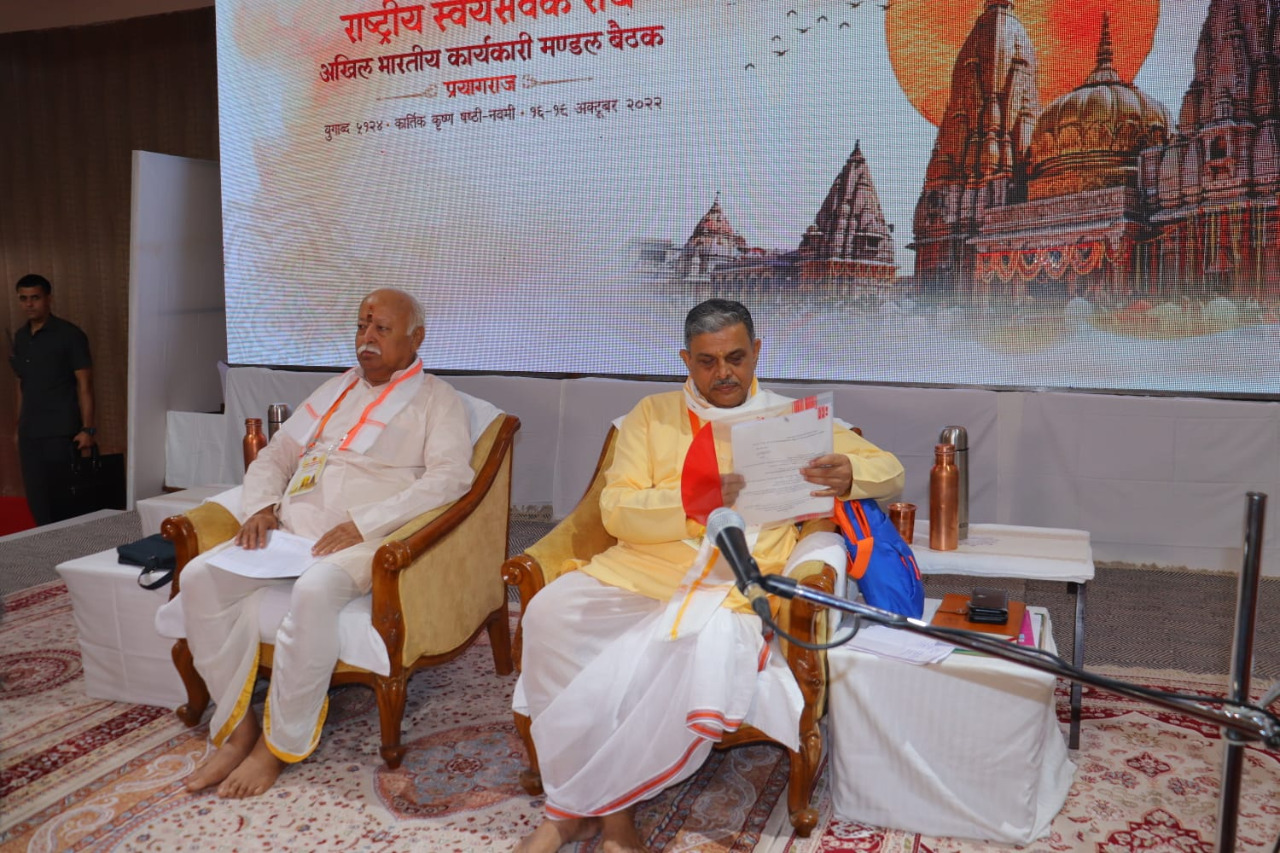 RSS’ Akhil Bhartiya Prachar Pramukh Sunil Ambekar briefed the media and further informed that the four-day meeting would review the progress on the annual working plan which was formulated in the Akhil Bhartiya Pratinidhi Sabha organized in the month of March this year.

The meeting will also take stock of the expansion of the organizational work and Sangh Shiksha Varg. There would be a discussion on the important contemporary issues of the country.

Besides, the meeting would discuss ways and means to follow up on the important issues that were figured by Sarsanghchalak in his speech on the occasion of Vijayadashami. Furthermore, RSS will be completing its hundred years in 2025 and therefore the meet shall consider plans to expand the number of its Shakhas across the country. He reported that currently there are 55000 Shakha places and the RSS aims to surge its numbers to one lakh by March 2024. The meeting would also discuss the proposed Sangh Shiksha Varg (Third Year) which would also be organized from 14 November to December eight in Nagpur this year. Earlier the Sangh Shiksha Varg programs were held only in the month of May.

Replying to a question he said that Sarsanghchalak’s speech on the occasion of Vijayadashami included education in the mother tongue, social equality, the Samvad process among all sections of the society, and women empowerment would be discussed in the meeting.

The Akhil Bhartiya Karyakari Mandal (RSS ABKM 2022) meet is being held at Gauhania located. At Vatsalya Institute in the Trans-Yamuna area of the district. The meeting will be concluding on October 19.

After the inauguration ceremony, Sangh paid condolences to its veteran leaders. And eminent personalities in various fields who passed away during the last six months. Notable among them are Dr. V Krishnamurthy, TV Sankaranarayan, N Sankar, Sri Divakar, and Shri Subbu Arumugam.

Dr. V Krishnamurthy is knowing as the father of public sector undertakings for his stellar role in steering BHEL, SAIL. And Maruti Udyog Limited among others passed away on 26.6.2022 at the age of 97.  He was conferres with Padma Vibhushan, Padma Bhushan, and Padma Shri awards.   He worked under 5 Prime Ministers.

READ- Society should wake up for sustainable change

TV Sankaranarayan, a renowned Carnatic musician and torchbearer. For the Madurai Mani Iyer style of Carnatic music passed away on 2.9.2022 at the age of 77. He won the Madras Music Academy’s Sangeeta Kalanidhi Award and was honores with the Padma Bhushan.

N Sankar, Industry Icon, Chairman of the Chennai-headquartered Sanmar Group. And a veteran in PVC manufacturing and other critical sectors. With significant contributions over five decades passed away on 17.4.2022 at the age of 76.

Sri Divakar, a Swayamsevak for more than 4 decades. And who held the responsibility of Chennai Mahanagar Saha-Karyavah. And Samparkka Pramumkh of VHP, Uttar Tamilnadu passed away on 1.9.22.

Shri Subbu Arumugam. He was an exponent of traditional Tamil ‘Villupattu’. (An ancient form of musical story-telling and the narration is interspersed with music). And has enthralled audiences for about 4 decades.  He was a ‘Padma Shri’ awardee and he passed away on 10.10.22 at the age of 94 years.  He has in fact composed a song on Dr.Hedgewar and sang it in the ‘villupattu’ style.

Moved Even SC; At Last Mathrubhumi Apologises To RSS

Brahma Vigyan: One who purifies his life by Ashtanga Yoga, he becomes a theologian

RSS Utsav Vijayadashami: No good work can be done without the role of society