PET Exam Lucknow: 3 arrested with solver in Amethi 34 percent in first shift and 33 percent in second left the exam 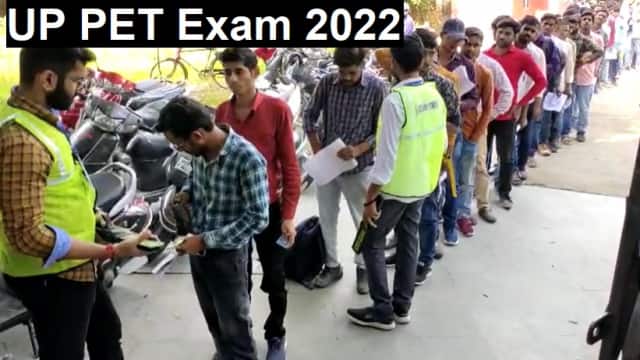 PET Exam Lucknow News: The preliminary examination (PET) of Uttar Pradesh Subordinate Selection Commission was completed peacefully on Saturday except for sporadic incidents. In the first shift of the examination, three solvers including a member of the solver gang were caught in Amethi. The students also created a ruckus over the delay in admission at some centers in Lucknow. The first shift examination started at 10 am, before that the process of admission started from 9.30 pm, but due to the delay in depositing the mobile, keys, watch, jewelery etc. of the candidates, there was panic. In the first shift, 34 and in the second shift 33 percent of the candidates left the examination.

A member of solver gang from RRPG College in Amethi and two others on his trail have been arrested by Amethi Police. This action was taken on the input of STF Lucknow. As soon as the input was received, the police, who reached the college, caught a member of the solver gang giving the examination in place of another examinee from room number 21. The arrested solver is Sonu Kumar of Madhubani, Bihar. During interrogation, he told that in the first shift he was taking the examination at the place of Aryan Kumar, a resident of Babuganj, Phulpur, Prayagraj.

He told that Pankaj, son of Aryan and Aryan Kumar’s maternal uncle, a resident of Soraon, is present outside the college. On this news, the police increased the vigil outside and as soon as the examination was over, Aryan and Pankaj were also caught on the spot of the solver. About 6500 buses were arranged by the Uttar Pradesh State Road Transport Corporation for the convenience of the candidates appearing in this examination.