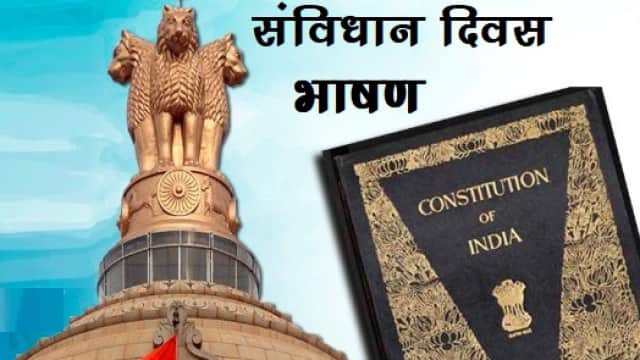 Here we are giving an example of ‘Speech on Constitution Day’ for school children. He can prepare his speech by taking ideas from here.

Respected Principal, teachers and my dear friends. Best wishes to all of you on Constitution Day.

When our country became independent on 15 August 1947, we did not have any constitution of our own. The country could not be run without the constitution, so a Constituent Assembly was formed to make it. Jawaharlal Nehru, Dr. Rajendra Prasad, Dr. Babasaheb Ambedkar, Sardar Vallabhbhai Patel, Shyama Prasad Mukherjee, Maulana Abul Kalam Azad etc. were prominent members of this meeting. Dr. Bhimrao Ambedkar was the chairman of the drafting committee of the constitution, hence he is also called the creator of the constitution.

In the year 2015, the Government of India decided to celebrate 26 November as ‘Constitution Day’.
2015 was a special year because that year the 125th birth anniversary of Dr. Bhimrao Ambedkar, the architect of the Constitution, was being celebrated. Since then, this day has been celebrated every year to promote a sense of respect among the citizens towards the constitutional values.

Why is Constitution Day celebrated in India on 26 November, why it is special

The Indian Constitution is the longest written constitution in the world. Many parts of it have been taken from the constitutions of the United Kingdom, America, Germany, Ireland, Australia, Canada and Japan. It describes the fundamental rights and duties of the citizens of the country, the role of the government, the powers of the Prime Minister, the President, the Governor and the Chief Minister. What is the work of the Legislature, Executive and Judiciary, what is their role in running the country, all these things are mentioned in the Constitution.

Once again best wishes to all of you on Constitution Day. Thank you all for listening to my thoughts. Hail India.