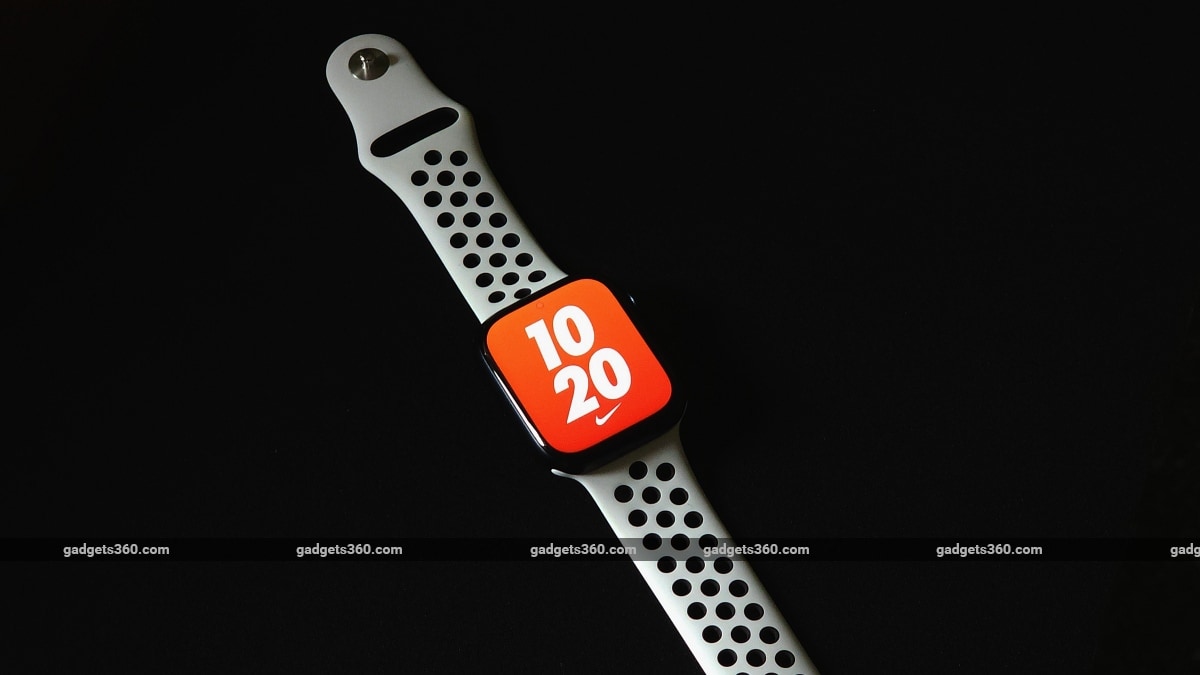 Apple launched a brand new model of its Apple Watch called the ‘Ultra’ at this year’s ‘Far Out’ launch event and it has been a major talking point. It’s bigger, chunkier, offers better hardware, and is designed keeping in mind a very special set of users. Another thing that the Apple Watch Ultra managed to do is steal the show from the standard Apple Watch Series 8. The new model does pack a few upgrades over the previous Series 7, but not as much as we were hoping for. Is the new Apple Watch Series 8 worth upgrading to or should you stick (or upgrade) to the Series 7 instead?

The Apple Watch Series 8 is available in two case sizes (41mm and 45mm) and two case finishes (aluminium and stainless steel). Another category you need to keep in mind when choosing an Apple Watch is connectivity. Here, you can choose between the GPS model or the GPS + cellular model.

There are a number of colours to choose from and the same can be said about the watch straps which range from simple silicone straps to rugged steel and the premium leather options. I received the Apple Watch Series 8 GPS + cellular model in the Midnight finish with the 45mm aluminium case for this review.

The quality, and the fit and finish of the new Apple Watch Series 8 remains the same as before, which is to say, is very good. While my watch came with the standard black Sport Band (made of silicone), I used the smartwatch with the Summit White/Black Nike Sport Band instead, which can be purchased separately for Rs. 4,500. Despite its weight of 38.8g, the Series 8 felt quite comfortable to wear while working, exercising, or otherwise, so much so that I even wore it to bed, which is something I don’t usually do with regular watches.

The Ion-X glass display on the Apple Watch Series 8 did not get scratched during the review period, and the same can be said about the aluminium case which rubbed against a thick metal chain and survived with no scratches. The more expensive stainless steel model offers better display protection with a sapphire crystal glass display, but is also priced a lot higher.

The Apple Watch Series 8 is water resistant up to a depth of 50 metres and comes with an IP6X rating for dust resistance. In the box, Apple thankfully still bundles the Magnetic Charger, with a USB-C port at the other end.

In terms of specifications, the Apple Watch Series 8 comes with the new S8 SiP or system-in-package and offers 32GB of storage which is used to store synced songs, photos and applications (apart from the watchOS software and respective app caches). Despite switching from the first generation Apple Watch SE (Review), I only managed to use about 10GB of the available space. The new S8 SiP supports WiFi, Bluetooth 5.0, and includes the W3 wireless chip for connecting with supported Bluetooth accessories, as well as the U1 chip (Ultra Wideband).

Like the previous model, the Apple Watch Series 8 also includes various health sensors for detecting blood oxygen levels and has the ability to record an ECG. The new bits that are brand new to the Series 8 include a more powerful gyroscope and accelerometer which helps with Apple’s new Crash Detection feature, and a new two-temperature sensor design, that’s used to track skin temperature when sleeping, and for the new ovulation tracking feature for women.

The Apple Watch Series 8’s 1.9-inch LTPO OLED display is the same as the Series 7, offering a peak brightness of 1000 nits, and up to 500 nits in its always-on state. Since the display is quite bright, I had no problems viewing it outdoors in the harsh afternoon sun. The always-on implementation works brilliantly with every watch face from the Face Gallery.

This not only works well with the regular watch faces that show information (time, date, weather, etc) but also for the Portrait watch face that dims the photo down to a level where it’s still possible to view and enjoy every photo when in this always-on state. This made it quick and easy to glance at information available on a watch face without having to flick my wrist and wake the display all the time.

Performance with watchOS 9 and the new S8 SiP is a smooth and fluid experience, whether it’s opening and running apps, using the watch to monitor workouts, or just switching between the beautifully designed watch faces. Among the new watch faces is Playtime, which has these fun, ballooned numbers floating in and out of the display to reveal the current time.

Apple’s new motion sensors (high-range accelerometer and gyroscope) can now detect a wider range of G-forces than what was previously possible. According to Apple, once a crash is detected by the watch, both the iPhone and Apple Watch work in sync and will call for emergency services (or notify emergency contacts) if the user does not respond within 10 seconds. The new temperature sensors now make it possible to receive retrospective ovulation estimates for women (requires the watch to be worn for at least two months before predictions begin), which can be handy when planning a family and is said to also provide improved period predictions.

While sleep tracking was previously available with the Apple Watch, watchOS 9 adds sleep stages (detecting and tracking REM, core and deep sleep) for delivering a lot more data to help users develop better sleeping habits. Apple says it has developed an advanced algorithm to check the same and tries to predict sleep stages based on signals from the accelerometer (movements when asleep) and the heart rate sensor. In my experience, I found the sleep stages data to be quite accurate. More so, because I have the habit of checking the time whenever I wake up in the middle of the night.

What’s interesting is how the Apple Watch Series 8 provides two sleep tracking readings in the Health app, one telling me the total time I spent in bed (lying almost motionless, reading a book, or watching videos) and the reading showing me the time I actually spent sleeping. What the Apple Watch is still missing compared to other smartwatches is the ability to track naps, as the sleep tracking only works during the assigned bedtime hours. With the new temperature sensors, the watch also tracks your temperature while sleeping, but it won’t alert you when you have a fever as it only tracks skin temperature and not body temperature.

In terms of fitness-related activities, the Apple Watch Series 8’s accuracy was quite good, whether it was GPS tracking when walking through my neighbourhood lined with trees and buildings, or tracking short indoor workouts. I also did a basic step count of 1000 steps without the iPhone and the results from the watch were close to accurate, with it just missing out on a few steps.

SpO2 tracking, when compared with a pulse oximeter, was not perfectly accurate. It kept fluctuating between 95 to 97 percent every time I took a reading which was minutes apart, and this also required me to hold my arm up in a particular position in order to do the test and get a result. SpO2 readings from the Apple Watch took just 15 seconds, compared to my oximeter which took about 30 seconds but with more consistently accurate results.

WatchOS 9 also brings the new compass feature called Backtrack (also available on older models), that will record your route using GPS so you can find your way back if you get lost. It can be activated manually but it also turns on automatically when there is no data or Wi-Fi connectivity available on the watch or via an iPhone.

Battery life on the Apple Watch Series 8 was as good as the Series 7, and it lasted me about two days on a single charge when connected to my Wi-Fi network or to the iPhone. My usage mainly involved viewing and responding to notifications, and about 30 minutes of exercise on some days, all with the always-on display enabled. Those who work out for a couple of hours could see battery life drop to about a day and half. Switching on the new low-power mode in watchOS 9 extends battery life by half a day, but it’s only useful for those who solely use the Apple Watch for viewing notifications as all the automated health tracking features and the always-on display are switched off.

One health-tracking feature that the low-power mode does not turn off is sleep tracking. It turned out to be the main source of battery drain, without which, the low power mode seemed pretty efficient at its job. Apple’s fast charging feature for the Apple Watch which was introduced with the Series 7, is present on the Series 8 and this charges it up quickly going from 0 to 100 percent in about an hour and fifteen minutes.

The Apple Watch Series 8 is a solid smartwatch for health and fitness tracking, and thanks to watchOS 9 users can now also get accurate sleep tracking data. What hasn’t changed or improved a lot is the battery life, which Apple seems to have addressed with the Apple Watch Ultrabut this model isn’t exactly meant for the average iPhone user. Crash Detection is a feature that no other mainstream smartwatch manufacturer has delved into yet, which is currently unique to the 2022 Apple Watch models.

If you are an Apple Watch user and simply crave something different, you should check out the Apple Watch Ultra (First impressions). It’s clearly built for the more adventurous type given its large dial size, but those looking for better battery life, a big display and don’t mind the hefty price, might find it appealing.